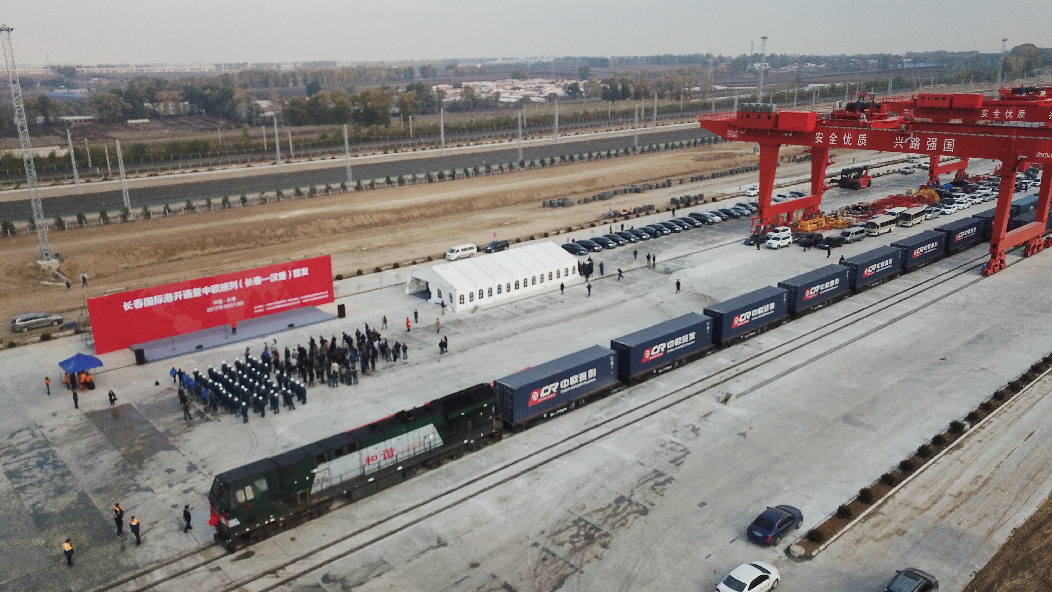 These windshields, designed for the medium and high-end models of Audi, will be transported to Heilbronn, Germany by the Changchun-Manzhouli-Europe cargo trains before arriving at Audi's assembly plants there.

The return trip of the train will carry auto components from Germany to Volvo's Daqing factory in Heilongjiang Province, which neighbors Jilin.
The China-Europe cargo trains have closely linked the old industrial base in northeastern China to the manufacturing bases in Europe and led to increasing industrial cooperation which is mutually beneficial and has contributed to the economy for both.

As an important project for Jilin to join the construction of the Belt and Road, the Changchun-Manzhouli-Europe cargo train line was launched in 2015.
The route starts from Changchun, exits China via Manzhouli, the largest land port on the China-Russia border, and passes through Russia, Belarus and Poland before arriving at the terminus of Nuremberg, Germany.

It measures about 9,800 km, and a single trip usually takes 14 days, saving more than 20 days compared with sea transportation, said Wang Yue, chairman of the Changchun International Land Port Development Co., Ltd. (CCILP), which operates the cargo trains on the route.
The inbound trains carry imports of engines, gearboxes and steering shafts from Europe and outbound trains have exports of goods like windshields, brake pads and bearings made by Chinese companies.
Since the Changchun-Manzhouli-Europe cargo train service was launched in August 2015, it has transported over 43,000 standard containers with the value of over 13.8 billion yuan (1.94 billion U.S. dollars).

Demi Ben, managing director of the CCILP GMBH, said, Changchun and some other northeastern Chinese cities are home to a number of top auto manufacturers and auto components enterprises, while Bavaria, where Nuremberg is located, is a major German automotive manufacturing base. The similar structure of the industrial clusters in northeastern China and the European country has paved the way for further cooperation.
The Nuremberg warehouse for the Changchun-Manzhouli-Europe railway has been very busy since it was put into use in June 2018, said Demi Ben, who is also in charge of the warehouse.
The auto components such as windshields and bearings from northeastern China are usually put into the warehouse for short-term storage and then sent to the appointed places required by the local business customers via the "door-to-door" service.
The Nuremberg warehouse has provided great convenience to small and medium-sized enterprises and attracted plenty of local enterprises in Germany to seek cooperation with Jilin enterprises, said Demi Ben.
Thanks to the Changchun-Manzhouli-Europe cargo train route, Jilin Universal Machinery (Group) Co., Ltd. set up an R&D center in Munich, where is adjacent to cities home to factories of top automotive manufacturers including Audi, Mercedes Benz and Porsche.
The Jilin Universal European R&D Center has cooperated with these automotive manufacturers on a number of projects, including producing steering knuckles for Porsche Panamera in its China plants.
Currently, there are seven projects under development, including steering knuckles for Audi and a small auto part for Mercedes Benz, which will bring a revenue of nearly 2 billion yuan to the company, said Li Jibao, chairman of Jilin Universal Machinery (Group) Co., Ltd.

MORE OPPORTUNITIES
Along with the frequent trade and cooperation between northeastern Chinese provinces and Europe via the Changchun-Manzhouli-Europe cargo trains, more and more European enterprises are starting to explore the market in northeast China.
Jiri Janku, startup advisor and investor of Feedyou, an AI service company from Czech, said on the just concluded 12th China-Northeast Asia Expo in Changchun, "compared with China's fast-developing big cities, small and medium-sized enterprises like us are more willing to seek business opportunities in northeast China."
On Aug. 19, Sino-German joint venture FAW-Volkswagen has put its new proving ground into use in the north of Changchun. The proving ground has five functional areas for durability, airbag effectiveness, highspeed loop, dynamic and performance testing, with 26 special test sections and 15 typical ones in line with Chinese road conditions.
Qin Huanming, a member of the board of directors at FAW Group, said the completion of the new proving ground will further promote the transformation and upgrading of both FAW and Volkswagen and deepen cooperation between the two.
A new industrial park is being planned in Changchun. "Many German companies have shown their interest in our park," said Chen Zhen, an executive of the company which develops the park.
China's northeastern region now has two pilot free trade zones -- one in Liaoning and the other in Heilongjiang. With similar latitudes and industrial foundation, there is plenty of scope for cooperation in high-end equipment manufacturing, ice and snow industry, among other fields, between the Chinese industrial base and Europe, according to experts.