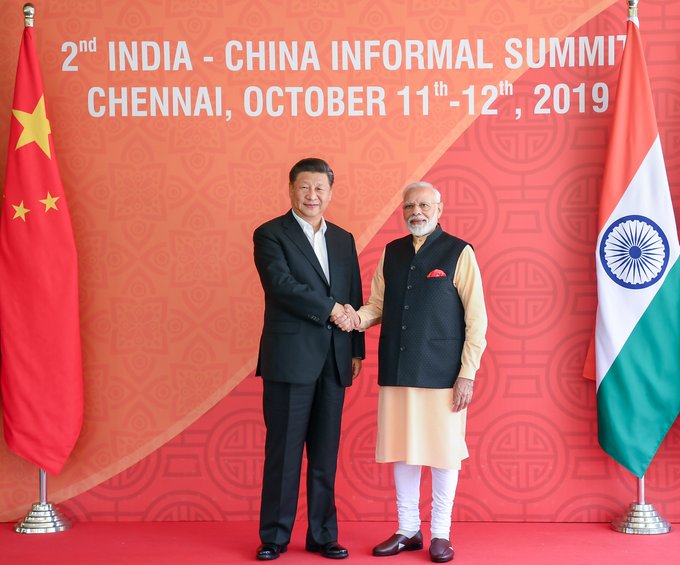 Islamabad, Oct.13: Chinese President Xi Jinping arrived in India on two-day trip for the “Informal Summit” held in Delhi and Chennai respectively. Xi met Prime Minister Narendra Modi, who is facing strained bilateral ties, and low reputation and trust as a statesman because of rising vandalism in India. Though two leaders met without any formal pre-determined agenda but officials termed Xi’s trip as “informal summit".

After Delhi, Xi and Modi met in the coastal town of Mamallapuram in Tamil Nadu, which had strong historical linkages with China's Fujian province, an ancient post of sea-borne Silkraod. Xi also visited the Shore Temple, dating back to the seventh and eighth centuries.

The official sources said one-to-one talks were designed for a free exchange of ideas on issues ranging from territorial disputes to India's expanding trade deficit with China, and the question related to Chinese telecoms equipment maker Huawei’s entrance into Indian market for 5G technology.

Despite trade-deficit and border skirmishes, the high level talks remained focused on a set of confidence-building measures.

The visit seemed nothing more than exchange of pleasantries between the so-called “buddies” as there was not any specific outcome of the two-day informal summit between PM Modi and President Xi.

But foreign official sources said India and China leaders,during the “informal summit”, attempted to find ways of bolstering trade and investment cooperation between the emerging economies.

Commenting on Xi’s India visit, Raveesh Kumar, the spokesperson of the Ministry of External Affairs of India, tweeted saying as “beginning of a new era of cooperation” . 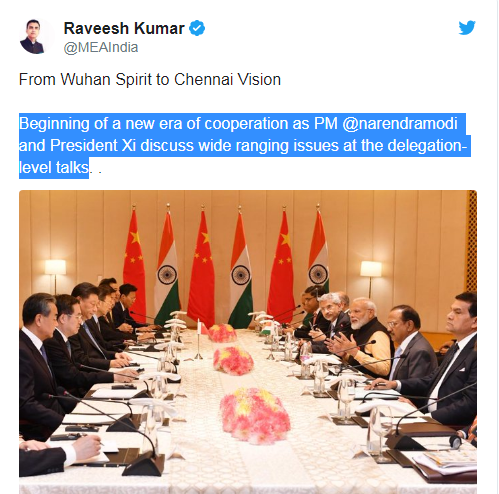 Speaking to an India news agency (PTI), Chinese Ambassador to India Sun Weidong said a "new set of consensus", including "guiding principles" on giving a new direction to the bilateral ties, are expected from the engagement between the two leaders.

During the talks, people-to-people relations also came under discussion. "There was new focus on people to people relations. It was decided that public of both countries must be brought in the relationship. Ideas were exchanged on this," Vijay Gokhale said.

Thanking Xi Jinping, president of world’s emerging economic power for coming to India, Modi tweeted saying "I thank President Xi Jinping for coming to India for our second Informal Summit. The #ChennaiConnect will add great momentum to India-China relations. This will benefit the people of our nations and the world" . 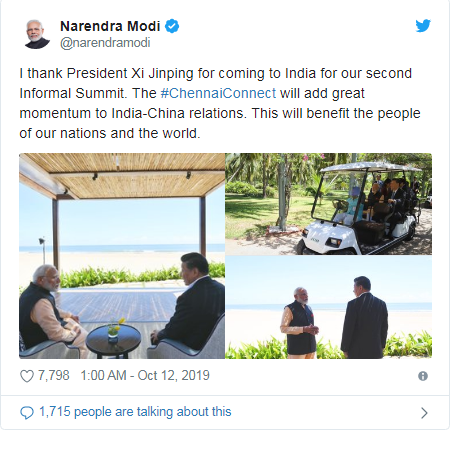 Though both Prime Minister Narendra Modi and Chinese President Xi Jinping on Saturday agreed to set up a new mechanism for issues relating to trade and investment and felt the two countries should cooperate on important regional and global issues, but no comments and talks on Kashmir, Hong Kong, Tibet and Belt and Road Initiative were reported in media.

The only out outcome was Chinese President Xi Jinping's invitation of PM Modi to visit China for next summit, which was accepted by Modi.

Foreign affairs experts say the timing of this meeting is also very significant as it comes against the backdrop of heated exchange of words between the two sides over the Kashmir issue following India's decision to revoke the special status enjoyed by occupied Jammu and Kashmir under Article 370.

From the news reports it seems that the “informal summit” aimed to prevent further deterioration of ties over the Kashmir issue and in Doklam tri-juction in Sikkim rather than focusing on charting a new roadmap of development, connectivity and cooperation between the two emerging economic giants of Asia.

India seems vooing China in the name of new era.But the roadmap of new era leads to Xi’s BRI, which India has not joined yet.