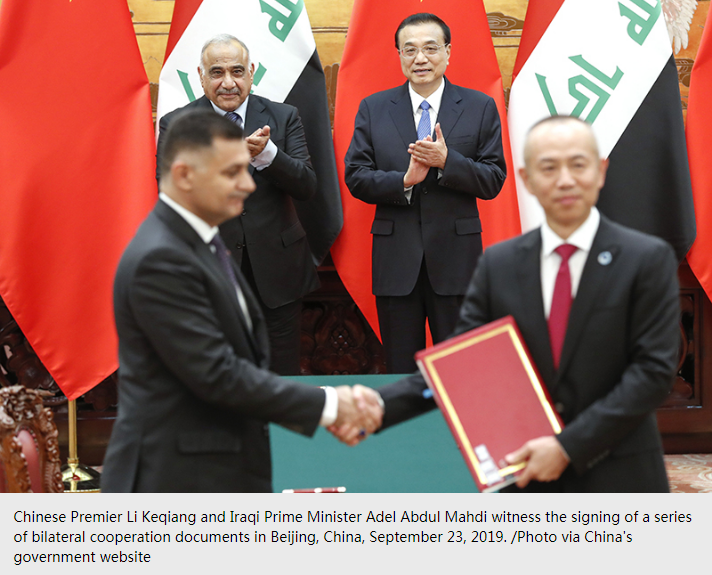 Abdul Mahdi was on an official visit to China from Sept. 19 to 23 at the invitation of Chinese Premier Li Keqiang.

“Iraq has gone through war and civil strife and is grateful to China for its valuable support,” said Mahdi, in comments broadcast on Chinese state media outlet CGTN.

“Iraq is willing to work together in the ‘One Belt, One Road’ framework,” he further added.

The chief architect of BRI, Chinese president Xi, who proposed the BRI in 2013, in his remarks said that the two countries would cooperate on oil and infrastructure projects.

“China would like, from a new starting point together with Iraq, to push forward the China-Iraq strategic partnership,” said Xi.

China was the first country to participate in Iraqi economic reconstruction and continued its work for the longest period. China has the most widely distributed projects in Iraq in terms of geography and fields. Chinese companies remained in Iraq even when the security situation was at its worst, said Xi.

Chinese premier Li Keqiang in his remarks said that China is willing to participate in Iraq's reconstruction, maintain a long-term and stable energy partnership with Iraq, and expand cooperation in capacity, manufacturing and agriculture to fuel the diversified development of the Iraqi economy and achieve win-win results. 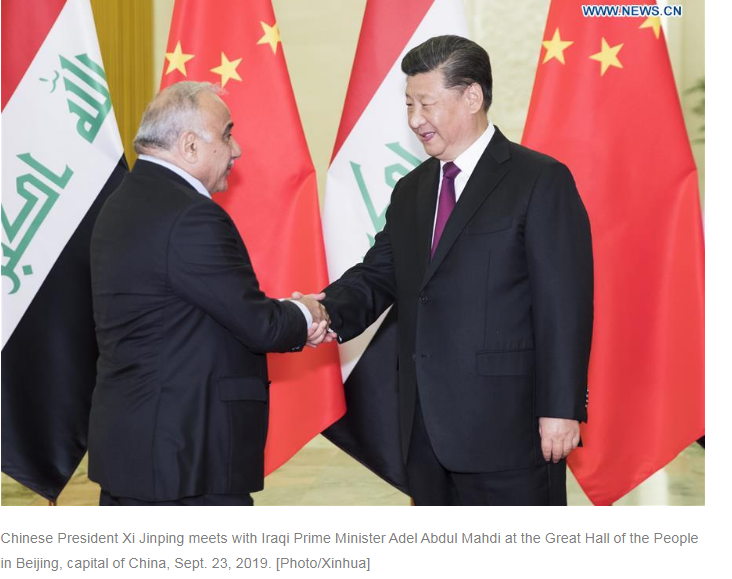 China stands ready to work with Iraq to dovetail the Belt and Road Initiative with Iraq's reconstruction plan, supports Chinese enterprises to positively take part in Iraq's infrastructure construction and hopes that Iraq will take forceful measures to guarantee the safety of Chinese institutions and individuals in the country.

Abdul Mahdi further said his country has experienced war and is rebuilding its homeland,  and added China is a country that loves peace and advocates cooperation, adding that Iraq is willing to work with China to enhance cooperation in the fields of trade, the economy, infrastructure construction, energy and culture to realize greater development of bilateral relations.

After the talks, Li and Abdul Mahdi witnessed the signature of a series of bilateral cooperation documents on the economy and technology, finance and culture.

After nearly 16-years of war, Iraqis are looking abroad to seek over $90 billion for the reconstruction of the homeland.

The Belt and Road Initiative (BRI) is a massive global network of ports, railways, roads and industrial parks spanning Asia, Africa, the Middle East and Europe, which will see trillions invested in new infrastructure.

Many developing countries have joined the China’s megaproject to seek financial support for their development projects.

More than 150 countries and international organizations have joined BRI, which is thought to be the largest infrastructure project in human history.

China has already made Belt and Road cooperation agreements and launched development projects with a number of other Middle Eastern nations, including the UAE and Saudi Arabia.