ISLAMABAD, June 16 (APP): Advisor to the Prime Minister on foreign Affairs, Sartaj Aziz, Friday terming Pakistan and China as “Iron Brothers” said the great friendship between the two has stood the tests of time and has moved from strength to strength under successive generations of leaders of both the countries, but in the past four years, it is crossed new thresholds and culminated in CPEC. 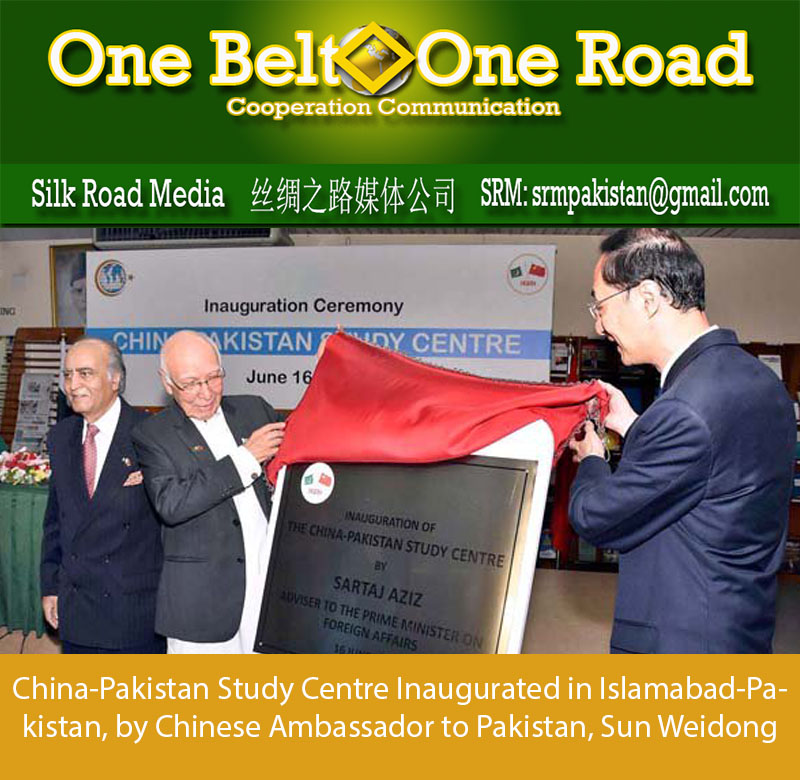 Addressing the inaugural ceremony of China-Pakistan Study Centre (CPSC) set up at the Institute of Strategic Studies Islamabad (ISSI) here, Sartaj said the strategic cooperative partnership must also include enhanced, pragmatic and meaningful cooperation in research, academia and science & technology.

There is a need in this context to link Pakistani Think-Tanks with their counterparts in China. These linkages would help in promoting better understanding of the vision of the two countries and focusing on complementarities between the peoples of Pakistan and China.

“I believe that this Study Centre will be a promising addition for providing a dynamic platform for scholars of both the countries to jointly pursue research projects on many areas of common interests and further promoting and cementing academic and scholarly exchanges between Pakistan and China.”

Think-tanks and Study centers are the nerve-centers of ideas and policy initiative so necessary for overall development and growth of countries, Sartaj said. They provide vision and guidelines to embark on the journey of prosperity and progress, he added.

Advisor said the knowledge creation and innovative research was key to excel in this globalized world. In this regard, The Institute of Strategic Studies has rendered outstanding services in excellent research and interaction on strategic and related issues, he remarked.

“I am confident that the timely initiative of establishing this center will provide the policy makers and intelligentsia the key resources to fully understand contours of bilateral relations between Pakistan and China and also provide opportunities to explore and expand cooperation.”

It goes without saying, he said, that China’s rise and economic pre-eminence is creating a new, economically prosperous and vibrant region.

“We in the region are fortunate to be at the centre of these dynamic changes. Together we must employ our academic and research resources to promote regional connectivity, trade, cultural, economic and people-to-people linkages, to create sustainable development and prosperity.”

In the recently held Belt and Road Forum in Beijing, Sartaj Aziz said a full session was dedicated to connectivity of think tanks among the OBOR countries.

“In my address there, I highlighted the need for closer cooperation among the think tanks for exchange of ideas and the need to come together and pool our intellectual resources. Through knowledge and experience sharing, both countries can learn, grow and progress together in the light of shared vision of common development and shared prosperity.”

In the context of the far reaching Belt and Road Initiative and its flagship project: China Pakistan Economic Corridor (CPEC), this Study Centre would prove to be a milestone for promoting academic exchanges and linking up think-tanks of both countries. I hope the centre will attract scholars and research of high quality, he said.

The Chinese Ambassador to Pakistan, Sun Weidong addressing the inaugural ceremony said the China’s initiative of connecting the regional countries through One Belt, One Road (OBOR) is carrying the spirit of peaceful cooperation that would be beneficial for all the countries in the region due to enhanced connectivity.

He said that China-Pakistan Economic Corridor (CPEC) is the pilot project of Belt and Road Initiative (BRI). The China-Pakistan friendship is based on mutual respect, trust, and support, he added.

He said the establishment of China-Pakistan Study Centre (CPSC) is the manifestation of the strong friendly relations between the two countries.

He said the people are interested to know more about China and its relations with the external world. People wanted to know how China developed and emerged as the second largest economy of the world.

The Ambassador highlighting the reasons behind quick development of China said the strong leadership of the communist party, peaceful development, hardworking nature of the Chinese people, peaceful coexistence, respecting sovereignty of other countries, and its history of never seeking expansion and hegemony enabled to achieve what it did in such a short span of time.

The Chairman ISSI, Ambassador Khalid Mahmood, said the CPEC is the stimulus for the establishment of the CPSC. He said the Centre would carry out research on China’s culture, education and society. The findings of the Centre would be published in the form of books, he informed.