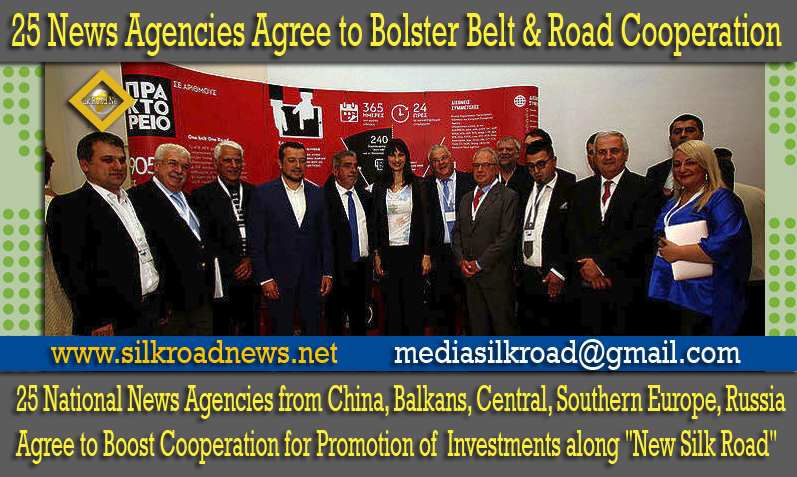 THESSALONIKI, Greece, Sept. 12: Representatives of 25 national news agencies from China, the Balkans, Central and Southern Europe and Russia agreed at the "New Silk Road" forum held on last Sunday to strengthen their cooperation to improve communication and cultural ties between the countries along the Belt and Road, according to Xinhua. The "New Silk Road" forum, organized by the Greek national Athens -- Macedonian News Agency (AMNA) under the auspices of Greek President Prokopis Pavlopoulos, was held in the context of the 82nd Thessaloniki International Fair (TIF), Greece's most prestigious annual trade fair, where China is this year's honored country.

High-ranking Greek government officials and prominent journalists participated in the conference which focused on coordinating the cooperation of news agencies in order to boost their commercial, cultural and trade ties, to promote growth and increase investments along the "New Silk Road".

In this context, all parts pledged to promote common business synergies, scientific and technological innovations and regional economic cooperation.

In his opening speech, AMNA President Michalis Psilos referred to the new challenges news agencies face today. As he stressed, social networks cannot replace real media, which have the responsibility to provide unbiased information to the public.

"Restoring a relationship of trust between the media and the society is the biggest challenge for the news agencies, as well as for modern media," Psilos said.

Psilos also underlined the strategic role Greece holds in the New Silk Road. "It is an economic revolution of global scope... This strategy gives Greece the room and the potential to upgrade its own role in the modern world as a member of the European Union," he added.

Digital Policy, Telecommunications and Media Minister Nikos Pappas, from his part, encouraged the news agencies' representatives to "spread the good news that Greek economy is turning a new page".

Xinhua News Agency Vice President Zhang Sutang voiced hopes that the forum will inject new momentum to the all-round cooperation among the countries along the Belt and Road.

"News media are entrusted with the mission to convey information, boost understanding and enhance cooperation, play a significant part in connecting peoples, and undertake a unique function in bolstering economic and trade cooperation among countries along the route," he noted.

In this direction, Zhang presented to the Forum's participants three proposals: first, to further enhance exchange of personnel and upgrade storytelling of the Silk Road, second, to create common values and build a sharing platform and, third, to adapt to the media development and expand the space for cooperation.

The forum concluded with the "Declaration of Thessaloniki", a shared statement with which the representatives of national news agencies outlined a nine-point action plan of international cooperation and expressed their intention to play a leading role in enhancing communication between the New Silk Road countries.

Among the objectives set out is to strengthen cooperation in the fields of news exchange, news coverage, new media, social media, web-based information, news sites, staff exchanges, support for other correspondents’ news agencies, taking into account the potential of each agency.

For the implementation and co-ordination of the joint actions, the participants in the forum intend to set up a secretariat, which will be based in Thessaloniki.

ANA’s President and General Director Michalis Psilos said participation in the secretariat will be on a voluntary basis and open to anyone who is interested. On the sidelines of the forum, ANA signed two new cooperation agreements with Turkey and Armenia’s international news agencies.

Until TIF closes on Sept. 17 exhibitors and visitors from 17 countries will explore opportunities for cooperation in several sectors, with China holding a leading role in this discourse this year.

The Chinese pavilion, which was inaugurated on Saturday by Greek Prime Minister Alexis Tsipras, covers 6,000 square meters, with the participation of more than 100 major Chinese companies.

Approximately 250,000 visitors are expected to visit the booths of some 1,500 exhibitors until next weekend, making it the most successful exhibition of the past decade, according to organizers