BEIJING, Aug 22:  The development work is in progress on Gwadar port and expressed the confidence that it would be fully operational in three to four years, Pakistan Ambassador to China, Masood Khalid Tuesday said during an exclusive interview with China.org.cn. A power plant is being set up there to provide electricity to the city and to the port and existing airport and highways are being expanded and built in Gwadar. “In three to four years, Gwadar will become a different city, and Gwadar port will be fully operational,” he said.

“In fact, ships have now started arriving and they are bringing cargo and equipment for the work on the port. All in all the progress is good. We need to work faster on the airport. We need the airport as soon as possible, and the roads,” Masood Khalid added. 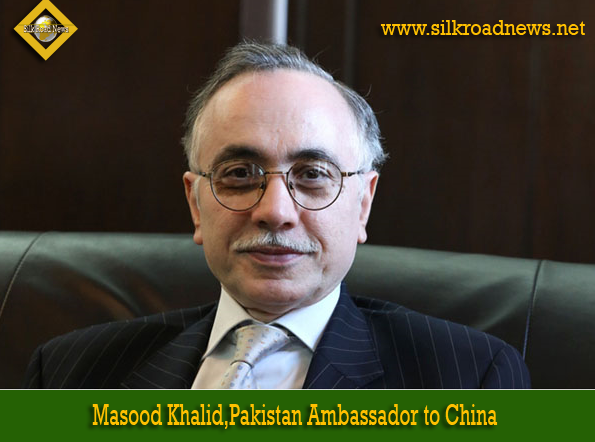 On how would Gwadar contribute to the region’s economy and security, he said Gwadar is an important port in terms of its location and it is very close to the Persian Gulf and the Middle East, and it will link up with China.

“We already have a highway to China, and we are working on upgrading and improving it so that it can become the main artery for trade and business between Pakistan and China,” he added.

Ambassador Khalid said the idea is that exports from China pass along this road, reach Gwadar, and are then transshipped to Africa and Europe. In terms of distance and cost, Gwadar will be very competitive, adding, “I am confident that it will gain momentum in the years to come.”

He said the port will serve the commercial and business interests not only of Pakistan but also of China and of the other countries in the region.”The whole of Central Asia is landlocked, and these countries need access to the seas for commerce and trade – we are in the ideal location to provide this.”

He said one company from Xinjiang has started to import seafood into China, but this industry needs to be upgraded. So the local fishermen can use modern technology to catch fish and to process and export them. So fishery, minerals, marble and granite, there is great potential to exploit these resources in the future.

Pakistan and China are mutual neighbors of several Central Asian countries, so Gwadar port will give a big impetus to the economic development of the entire region, he said.

Ambassador Khalid said the port will play an important role in promoting China’s commerce, trade and business through Pakistan to the outside world, and also the reverse and added, “In fact, we have a plan in the future to link Gwadar with Kashgar through energy pipelines and communication infrastructure.”

He said there are projects, there are jobs, and the infrastructure has improved, so the CPEC is contributing to the socioeconomic development of Pakistan and to the welfare of the Pakistani people.

About the opportunities brought by the Belt and Road Initiative to Pakistan’s economic and social development, and cooperation between China and Pakistan, he said during Premier Li Keqiang visit to Pakistan in 2013, an understanding was reached between Pakistan and China to create the China-Pakistan Economic Corridor (CPEC).

“Then we got into the discussions as to how the corridor would take shape. Subsequently there were a number of formal meetings between officials and experts from Pakistan and China to work out a framework to realize the corridor,” he added.As this corridor project is part of President Xi Jinping’s the Belt and Road Initiative, so after 2013 both sides worked on the planning of the corridor.

Ambassador Khalid said the actual work started somewhere in 2015. So you can say the delivery has only been two-year project. What we did was that we divided the concept into various actionable programs, projects related to the power sector, to infrastructure, to development of Pakistan’s port, and to setting up industrial and economic zones.

“Now we are working on these, and the work is going on in a satisfactory manner; we are making good progress and corridor is picking up momentum. This is good for the two countries’ bilateral relations,” he added.

Commenting on the opportunities for the people living along the route of the corridor, he said the CPEC development is a project because it means concrete on the ground projects and also mentioned infrastructure projects, the port, and power projects.

He informed in the power sector the progress has been good as work is under progress on about sixteen power projects, to add about ten thousand megawatts of electricity by next year, by 2018.

Ambassador Khalid said under this program, some major projects have already entered service. Last month in July the inauguration of the first coal-based power plant – more than 1,300 megawatts took place in the Punjub province. Other similar projects, also big in scale,are likely to be operational by the end of this year.

He said the government aims to overcome a power shortfall that the country has been facing for many years, which was impeding our economic development.

“So by generating, by overcoming this deficit of power in our system and in our national grid, we will be able to give a boost to the process of social economic development and to our economy,” he added.

Ambassador Khalid said in the last two or three years, Pakistan’s economic indicators have improved significantly, and there has been micro-economic stability in Pakistan which has been acknowledged and welcomed by independent analysts and accrediting agencies.

“This is because of the growth in the economic sector. Our GDP has also shown improvement – we hope to achieve more than 5.4 percent or 5.5 percent growth this year,” he said and added, last year the GDP grew by 4.7 percent, an unprecedented figure in the context of the last seven years.

Regarding China and Pakistan all-weather strategic partners, he opined One Belt One Road is a far-reaching initiative in terms of its positive applications for the world.

“It will serve the interests of peace and stability, economic development and progress of our respective regions. And that is why it has attracted the attention of a large number of countries, which have committed themselves to advance this project,” he added.

He said the strategic partnership is multi-faceted and expressed the confidence that this journey of friendship will continue in the future, adding, “We are an active participant in this initiative, and we are working on CPEC project which is a flagship One Belt One Road project.”

He said for the last three years or so, we have acted with firm resolve to deal with some of the challenges we face. “We have put up a determined fight against terrorism and extremism.”

On the economic front, Pakistan has shown promise and its economy has improved. It has great potential. It has almost 200 million people, the sixth most populous country in the world. Its location is ideal; you can see it is a bridge between different regions.

“We are between two big nation neighbors. We are close to the Middle East, we are a neighbor of Iran, Central Asia is next door, and Russia is not far off. This gives Pakistan a natural advantage to promote regional economic growth. Pakistan’s resources are enormous, and as yet largely untapped.”

“In terms of foreign policy, in terms of our foreign neighbors, we believe in peaceful coexistence. We believe in peace with our neighbors for our own growth and development. We do not want enmity with anyone. We want peace and friendship,” he added.

He said this is the overarching objective of Pakistan, to live and let live. China is a friendly country, a strategic partner and a partner with whom we relate in terms of people to people interaction and friendship, and the affection that we have for each other.

He congratulated China.org.cn on launching its website and hoped it would continue to play an active role in promoting and strengthening the friendship between Pakistan and China.