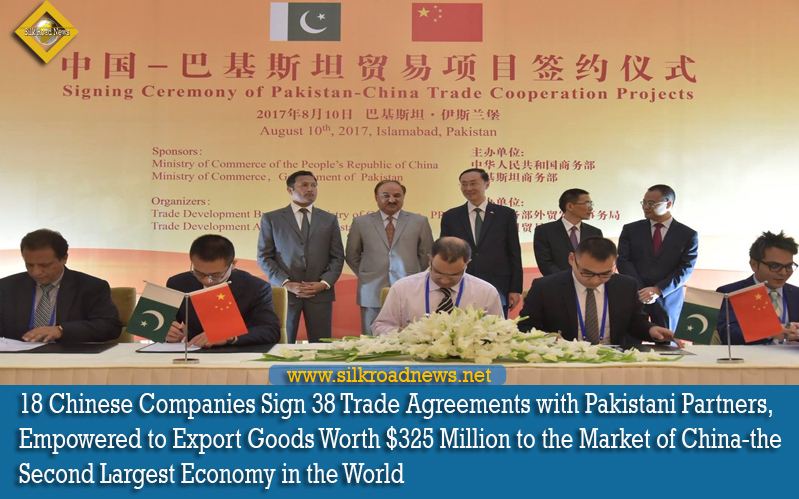 18 Chinese Companies Sign 38 Trade Agreements with Pakistani Partners, Empowered to Export Goods Worth $325 Million to the Market of China

Islamabad, Aug. 11: Pakistan and China on Thursday signed over three-dozen trade pacts for exporting $325 million worth of goods to Beijing, aimed at addressing private sector’s concerns about adverse implications for their businesses of government-to-government trade deals.The signing ceremony for the Pakistan-China Trade Cooperation Projects was held in Islamabad in which 18 Chinese companies signed about 38 trade agreements valued at $325 million.

China’s Ministry of Commerce has organised visit of a trade promotion group to Pakistan. Eighteen Chinese companies associated with textile, pharmaceutical, agriculture product, petrochemical and commercial trading sectors are on a three-day trip to Pakistan.

The 2006 China-Pakistan Free Trade Agreement (FTA) has tilted the balance in favour of Beijing, sparking fears among local businesses about trade disparity. Tariff and tax concessions given to Chinese businesses under the China-Pakistan Economic Corridor (CPEC) have further aggravated the situation.

Usually, such business-to-business deals are done by the private sector without the involvement of government departments. The signing of trade agreements showed that China highly valued Pakistani market, the Chinese ambassador stated after the signing ceremony.

Weidong said China was hoping to become Pakistan’s biggest trading partner for the third consecutive year. He said CPEC was progressing smoothly and its completion would address energy supply and infrastructure issues.

Bilateral trade between Pakistan and China currently amounts to $19.2 billion, of which Pakistan’s share was a paltry $1.9 billion in 2016, Inamullah Khan said.

Overall exports of the country have also decreased after the current government came to power in 2013, cumulatively reducing by one-fourth at $20.9 billion.

The TDAP secretary said the new initiative would promote Pakistani products in Chinese markets through a more focused approach. The $325 million trade deals are equivalent to one-fourth of Pakistan’s exports to China in 2016-17.

He said the two countries’ economies were complementary to each other, urging businesses of both sides to take full advantage of the relationship.
Promoting bilateral trade cooperation is one of the key elements of CPEC’s long-term plan (LTP). LTP documents reveal that Pak-China trade has grown rapidly in the past five years with average growth of 18.8% per annum.

Bilateral investment has also soared during this time with China becoming one of the largest foreign investors in Pakistan.

The LTP recommends strengthening Pak-China cooperation in trade and industry and adopting a liberalised trading regime. It focuses on construction of industrial parks in Pakistan to realise these goals along with reducing reliance on the US dollar for bilateral trade by using the Chinese renminbi (RMB).

“Both countries shall strengthen financial cooperation between their Free Trade Zones and explore the formation of a RMB backflow mechanism,” the LTP notes.