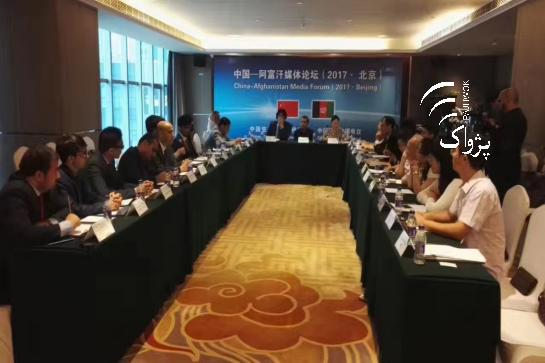 BEIJING, July 23: Afghanistan was not central to China’s One Belt One Road (OBOR) initiative but efforts were being made to make Afghanistan a central point of the mega connectivity project, linking Asia with Africa and Europe via land, sea as well as air routes. First secretary of the Afghanistan Embassy in China, Syed Mehdi Manadi, made these remarks at a joint meeting held between Journalists from Afghanistan and China discussing various opportunities that could help improve relations between the two countries. The meeting was held on held on July 20, 2017 in Beijing, the capital of China.

Manadi further said media’s role in improving relations between the two countries was vital because media could attract Chinese investors and inform people about the China’s One Belt One Road (OBOR) initiative.

China’s One Belt One Road (OBOR) project was not given a fair coverage in the media, he added.

Manadi said economic development was vital for peace and stability therefore the Afghan media should strive to attract Chinese investors to Afghanistan.

He added the Afghan mission in Beijing would strive to pave the way for Chinese journalists to visit Afghanistan to know development, opportunities and experience culture of heart of Asia.

Afghan journalist Mohammad Shabir Ahmadiin his remarks thanked the Chinese government for giving them the opportunity to visit China. He said media’s role was key to bilateral relationship development.