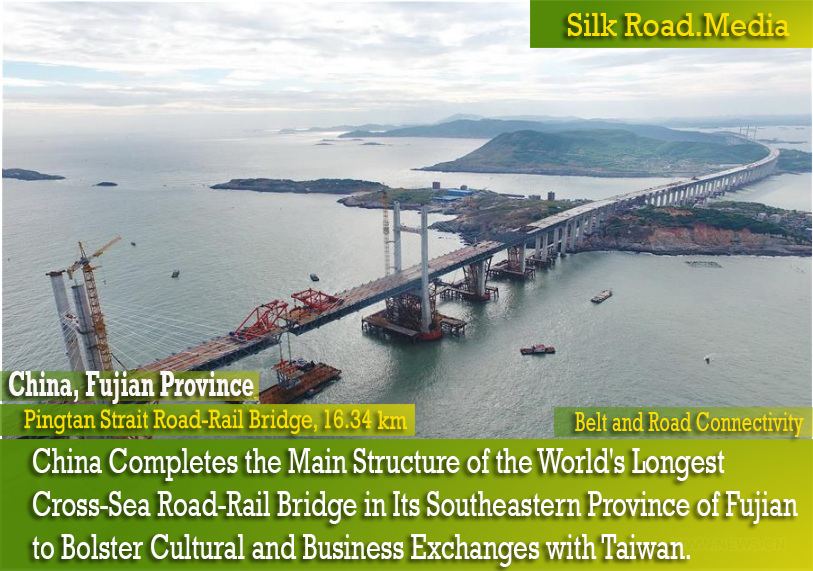 Beijing, Sept. 26 (NSN): Chinese engineers and technicians have completed the main structure of the world's longest cross-sea road-rail bridge in its southeastern province of Fujian to bolster cultural exchanges and business development with Taiwan.This mega project of transportation and logistics reinforces China’s leadership in infrastructure investment.

More than 1.24 million tonnes of steel have been used for the bridge, enough to build 190 Eiffel Towers.

Some 2.97 million cubic meters of cement, nine times the amount of cement used to build the Burj Khalifa towers in Dubai, the world's tallest skyscraper.

Officials say the bridge, which is expected to open in 2020, can help shorten travel time from two hours to half an hour between Fuzhou, capital city of Fujian Province and Pingtan, a pilot zone set up to facilitate trade and cultural exchanges across the Taiwan Strait.

During the last decade, China has been seen as a "powerhouse of infrastructure development " for countless dazzling megaprojects, with the Chinese builders breaking their own world records.

It is worth noting that China is home to the world's highest bridge, longest cross-sea bridge and 90 out of the 100 highest bridges built this century.

From 2015 to 2020, China's transportation investment is expected to exceed 2.1 trillion U.S. dollars, with a substantial portion reserved for bridge construction.

Besides the Pingtan Strait Road-rail Bridge, China’s leadership has charted equally ambitious infrastructure development plans for the future. And, BRI is one of them, which is likely to increase the efficient transport logistics to tie the Eurasian region together and boost regional economic development.