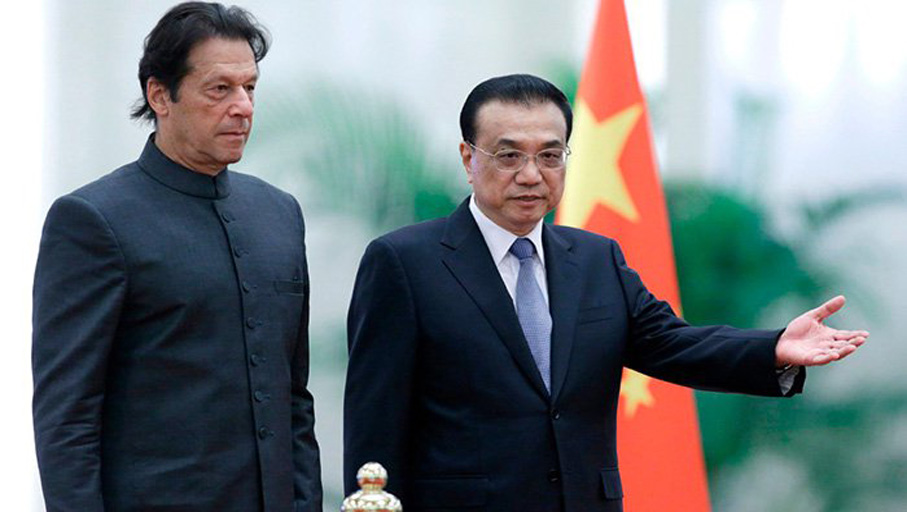 Beijing, Nov. 3: Geopolitics is changing rapidly. Friends yesterday may not be friends today. Especially this part of the world is under immense focus and may play a pivotal role in geopolitics of tomorrow. India formerly a close ally of the USSR is in the American Bloc, Turkey a long time NATO ally is getting closer to Russia. Middle East is under tense situation, either Yemen, Qatar, Iraq, Libya, Saudi Arabia, all have certain degree of political instability. Iran may face trade sanctions imposed by the US from 5th November 2018. Russia, India and China are major importer of energy from Iran, and may not accept US imposed sanctions. What situation may emerge, no one can guess yet. The US trade war on China and opposition to BRI are all efforts to curtail China. US’s supremacy is being challenged and may not sustain forever. Over-all the situation is quite tense& hostile and reminds us of the cold war era.

Prime Minister Imran Khan, is on a 4 days official visit to China from 2-5 November 2018. He is scheduled to meet President Xi Jinping on 2nd November. This will be first time that two strong leaders will meet and it is expected that both would reach a long lasting understanding. It is worth mentioning that, both leaders have so many things in common, like both are honest and visionary leaders, both are against corruption and both have their peoples service to their heart. Both have a common agenda to serve their people and develop their country they enjoy popular support of their masses and rule over the hearts and souls of their own people.

On 3rd November, Imran Khan is planned to visit the Monument of the people’s heroes at Beijing’s Tiananmen Square, paying his symbolic respect to heroes who sacrificed their lives during war of liberation, and later afternoon will meet Chairman of National People’s Congress, the highest legislative platform in China. On 4th November, he will speak at Central Party School, the source of Chinese party leadership, as a nursery, which trains and provides leadership to the Communist Party of China.
Prime Minister, Imran Khan, will also attend the first-ever Shanghai Import Expo on 5th of November, as the guest of honor at the opening ceremony. Import Expo is a unique concept, innovated by China only. He will be accompanied by a 75- member strong delegation of Pakistanis businessmen. Business-delegation is consisting of leaders of various businesses in Pakistan. They will have the opportunity to interact with Chinese entrepreneurs and I believe, it will open avenues of future collaboration.
Pakistan’s import from China stands at 14.5 Billion US Dollars, while export to China is only 2 Billion US Dollars only. The trade gap is rather huge. The Shanghai Import Expo will bring this gap to narrow down to some extent. Shanghai Import Expo is a very positive step and a clear message that China promotes globalization. It is expected, the rest of the world may also appreciate it and be beneficiary of Chinese free and fair trade practices.

It is expected that both leaders will consider the geopolitical challenges faced by two nations, and may formulate a joint strategy. China is under severe criticism of BRI and facing trade war challenges. US is openly curtailing Chinese influence and BRI development. Pakistan is passing through the worst economic crisis and foreign debt burden. All such issues will be on top of the agenda during this visit. China-Pakistan Economic Corridor (CPEC), which is the flagship project under BRI, will also be under discussion. Pakistan understands CPEC is vital for economic take-off of Pakistan and pays due importance to CPEC. Pakistan wants to speed it up and widen its scope too. Saudi Arabia has shown interest to join CPEC and China has agreed. It may open options for any other country to join CPEC and it is expected that Iran, Turkey, Afghanistan, and many other countries may be involved in CPEC in the very near future. All these are important issues and need close consultation with China.

The most important is to create harmony between the two leaders and joint strategy to face the challenges of the coming days. They may design roadmap of future cooperation. Pakistan and China are always on the same page and support and protect each other’s interests. It is not something new, it was our standard practice in the past and will remain unchanged in the future too. We both nations are synchronized so well that no other nation can tear us apart. Our friendship is so deep-rooted and based on such a strong foundation that any effort to create any misunderstanding between us would go to the drain.

The visit will be a message of “Peace, Harmony, Security, Stability, Development and Prosperity” not only for Pakistan and China but for the whole region. World may appreciate this role model.