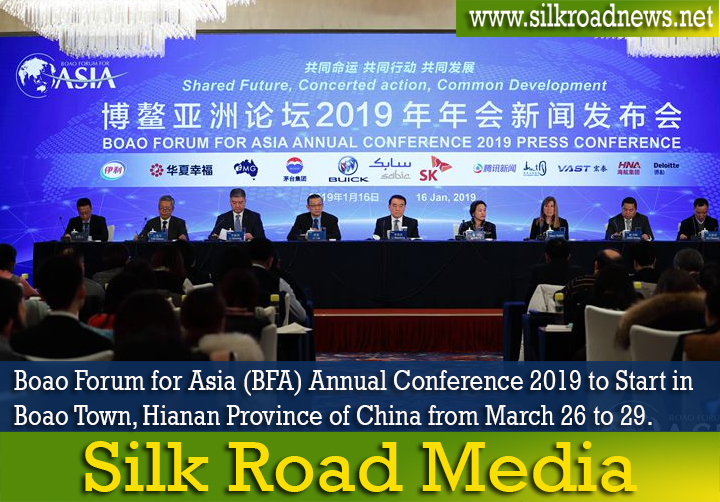 BEIJING, Jan. 17: The Boao Forum for Asia (BFA) Annual Conference 2019 will be held in Boao, a coastal town in China's southern island province of Hainan, from March 26 to 29 to promote Asian Cooperation. The theme of conference 2019 will be "Shared Future, Concerted Action, Common Development," announced BFA Secretary General Li Baodong on Wednesday.

The opening plenum will take place on March 28.

According to Li, the theme and topics of this year's event cover a wide range of issues of common interest among stakeholders. The program was finalized after several rounds of discussion among BFA's initial countries, board members, advisers, partners and think tanks.

Speaking at the press conference, Li said that globalization and free trade are inevitable trends of economic development and that multilateralism, dialogue and cooperation are the shared aspiration of most countries. He stated that openness and innovation are natural choices to sustain economic progress and globalization. As a widely watched event, this year's conference will provide an open, inclusive dialogue platform for stakeholders and send a clear message to build consensus regarding global governance, he said.

Li added that the BFA annual conferences, hosted in China, have been attended by state leaders every year. Currently, the BFA secretariat is maintaining communication with state leaders and has received positive feedback regarding their presence at the 2019 Annual Conference. Additionally, a number of other Asian and European leaders have stated their intention to participate.

Dubbed as the 'Asian Davos', the BFA has been held since 2001in the town of Boao town of Hainan Province, China's largest special economic zone, was an experimental area to deepen Mainland’s connection with international community. The forum attracts leaders from government, business and academic institutions throughout Asia and beyond, who come together to share their thoughts on the most pressing issues in the region and the world at large.

Aiming to become an ecology-based province, Hainan has told the world that its current and future development focus has been on ecological industry, a field valued highly by Asian and international communities and meeting the world economic development trend.