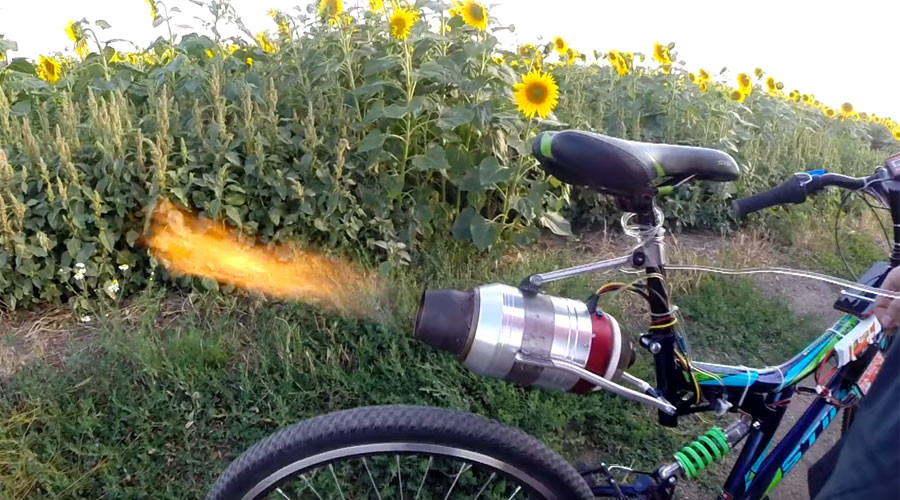 Moscow, Aug. 2: A Russian inventor tested his limits by designing a homemade turbo jet-powered bicycle. The invention will add new direction to the Russian engineering.Igor Negoda demonstrated his incredible design, which he dubbed a “jet bike,” during a test run in the Rostov Region last weekNegoda mounted the 18kg (39lb) thruster onto the back of the bicycle, and added some extra features such as a GPS system to monitor his speed. He also built in tech to watch the engine’s RPM, thrust and temperature.

As well as mounting various other pieces of core kit such batteries and a power radio receiver to the bike, Negoda carries a mini-fuel tank in his backpack.

The inventor and speed demon first demonstrated the turbo jet’s thrust by clearing the dust and rocks from his surroundings, before taking the jet bike to an open road where he reached speeds of 72kph (45mph).

Baku-Tbilisi-Kars (BTK) Railway to be Commissioned Around September 2017 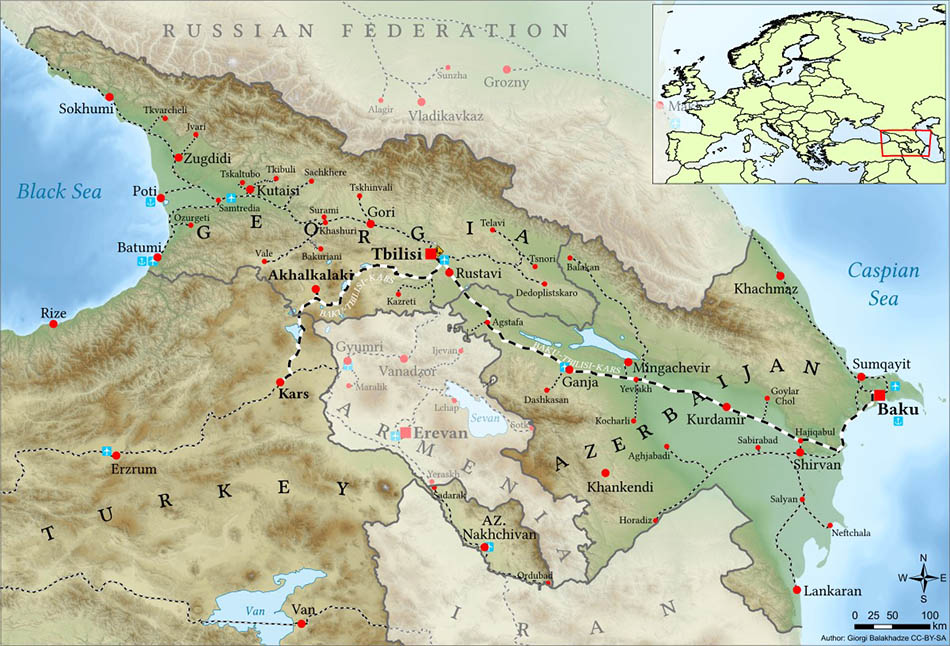 According to the ministry, this project is important not only for Turkey, but for the whole region.
"The BTK project will ensure transportation of goods from Central Asia to Europe and vice versa.
This project is also important in terms of passenger transportation," said the ministry adding that the first passenger transportation has been carried out today.
The ceremony was attended by Chairman of Azerbaijan Railways CJSC Javid Gurbanov, Turkey’s Minister of Transport, Maritime and Communications Ahmet Arslan, CEO of Georgian Railway Mamuka Bakhtadze and President of JSC NC Kazakhstan Temir Zholy (Kazakhstan Railways) Kanat Alpysbaev.
The ministry said also that it is expected that cargo transportation via the BTK can be increased up to 35 million tons after 20 years of the railway’s operation.
The BTK railway project will bring additional revenues to Turkey.
The BTK railway is being constructed on the basis of the Georgian-Azerbaijani-Turkish intergovernmental agreement. The peak capacity of the railway will be 17 million tons of cargo per year. At the initial stage, this figure will be one million passengers and 6.5 million tons of cargo.

Liu, a member of the Standing Committee of the Political Bureau of the CPC Central Committee, made the remarks while meeting with Czech Prime Minister Bohuslav Sobotka. Liu is paying an official goodwill visit to the Czech Republic.

Noting the Czech Republic was one of the earliest countries recognizing and establishing diplomatic relations with the People's Republic of China, Liu hailed the two countries' increasingly closer high-level communication and strengthened political mutual trust.

Under the guidance of Chinese President Xi Jinping and his Czech counterpart Milos Zeman, China's relations with the Czech Republic are better than they have ever been, Liu said, adding that people from both sides have been deeply inspired.

He urged the two sides to seize the opportunities arising from the Belt and Road Initiative and "China-CEE 16+1 mechanism" to deepen mutually-beneficial cooperation and reap more achievements.

The China-CEE 16+1 mechanism is a platform created in April 2012 by China and 16 Central and Eastern European (CEE) countries.

Both countries, with a long history and abundant culture, have made impressive contributions to mankind's development and progress, Liu said, stressing that China is willing to boost cooperation with the Czech Republic in fields such as culture, education, sports, tourism and Chinese medicine.

Sobotka, for his part, noted that his country's rapidly growing relations with China are guided by the two countries' leaders and driven by the Belt and Road Initiative.

Sobotka promised that his government would provide firm support for closer cooperation with China in trade, transportation, tourism, medical care and people-to-people exchanges, so as to continuously inject new vitality into bilateral ties.

Beijing, July 18: Representatives from Central and Eastern European Countries (CEEC) gathered in Beijing on July 17,2017, to meet their Chinese counterparts for a dialogue under the theme of “Belt and Road Initiative and Global Communication.”

Among other goals China hopes to achieve through the Belt and Road Initiative, the country aims to boost cooperation with Europe in trade, technology and transport.Representatives participated in panel discussions focused on national governance, new media communication, and community building.

Jiang Jianguo, minister of the State Council Information Office, and Dalia Venceviciene, spokeswoman of the Lithuanian parliament, delivered speeches at the opening ceremony of the China-CEEC Spokespersons Dialogue.

"Although geographically far away, China and Central and Eastern European countries are closely bound together in the past and at present,“ said Jiang. "Many of them have actively participated in the Belt and Road Initiative, and there are still brighter prospects in various cooperation fields, such as infrastructure and energy."

"You will be more competitive if you are able to receive more information, and you will be more successful if you are able to express your ideas," said Wang Songmiao, spokesperson of the Supreme People’s Procuratorate. "It’s time for us to learn from each other and communicate better with each other on various ideas such as anti-terrorism, justice and equality, as well as win-win cooperation.”

Slavi Vassilev, deputy to the head of cabinet to the president of the Republic of Bulgaria, praised the event for bringing people from both sides together.

As for the future, Yan Jiangying, spokesperson of China Food and Drug Administration, thinks Chinese representatives should act as a "coordinator, planner and communicator, especially in the new era of digital media."

"We should act as a bridge to inform the countries along the Belt and Road route about what the Initiative is, and what we will be doing in the future," added Yan.

Cargo Transportation via Baku-Tbilisi-Kars (BTK) Railway to Increase to 500,000 Containers

Baku, July 19: An agreement to establish a logistics center was signed in Kars In the framework of the Baku-Tbilisi-Kars (BTK) railway project,  said Javid Gurbanov, the head of Azerbaijan Railways CJSC, during his visit to Kars province of Turkey on July 19, one of the Turkish TV channels reported.

Gurbanov noted that entrepreneurs will annually be able to send 2 million tons of goods with preferences by the BTK railway, further adding that in the future the volume of cargo transportation along the BTK route will be increased. 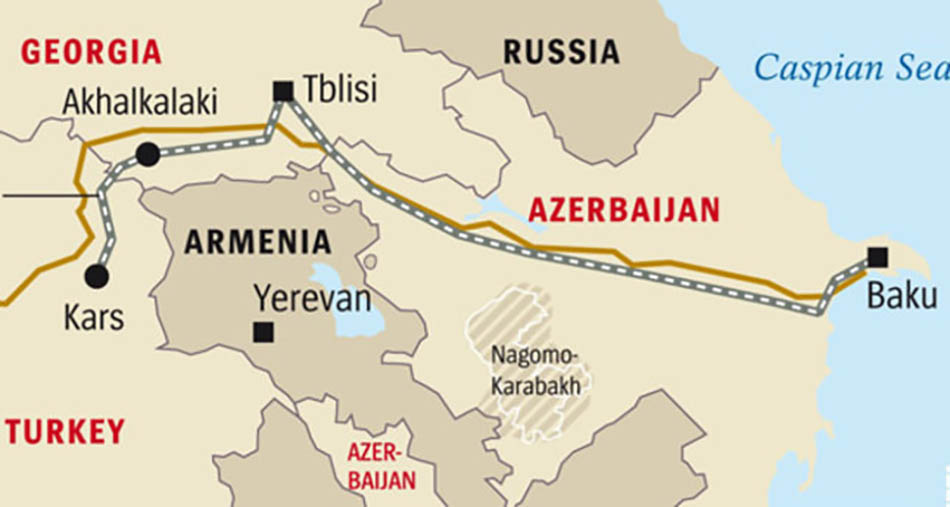 He went on to say the BTK railway communication project will ensure the development of the region. He also expressed the hope that in the future cargo transportation from Kazakhstan and China via the Baku-Tbilisi-Kars railway will increase to 500,000 containers. The BTK railway is being constructed on the basis of the Azerbaijan-Georgia-Turkey intergovernmental agreement.

The main purpose of the project is to improve economic relations between the three countries and gain foreign direct investment by connecting Europe and Asia.

ASTANA, July 17: Kazakhstan and China signed $160 million in agreements July 11 during the Kazakh-Chinese Agriculture Investment Forum held as part of a two-day visit to the capital by Chinese Minister of Agriculture Han Changfu at the invitation of the Kazakh Agriculture Ministry.

The forum brought together more than 100 business, education and science representatives from both nations.

“During the forum, seven agreements were signed worth $160 million in total. Three of them are agreements dealing with trade. This is the agreement with our Food Contract Corporation that stipulates the supply of 200,000 tonnes of grain and 100,000 tonnes of oil crops [to China], as well as the construction of a grain terminal at the Kazakh-Chinese border,” said Kazakh Deputy Agriculture Minister Gulmira Issayeva, as quoted by Kazinform.

Construction of a biosafety laboratory will begin in several stages.

“The first stage will run based on the grant provided by the Chinese side aimed at the establishment of a modern veterinary laboratory, where specialists will be able to conduct joint research of farm animals’ diseases. Afterwards, a laboratory of a similar kind will be established to study quarantine objects and thus we will cover the entire range of agricultural products,” added Issayeva.

China and Poland should seize the new opportunities from the Belt and Road Initiative and the "China-CEE 16+1 mechanism" to enhance mutually-beneficial cooperation, China's top legislator Zhang Dejiang said in an official friendly visit to Poland between July 12 and 16.

During his meeting with Polish President Andrzej Duda, Zhang said the traditional friendship between the two peoples has been consolidated. "In the past two years, Chinese President Xi Jinping and Duda exchanged visits, and the two nations have worked to build a comprehensive strategic partnership, which opens a new chapter in the Sino-Polish relations", Zhang said.

The two sides should seize the new opportunities bestowed by the Belt and Road Initiative and "China-CEE 16+1 mechanism", so as to intensify mutually beneficial cooperation in the areas of economy, trade and investment, and to forge ahead with bilateral relations, Zhang said.

The 16+1 mechanism is a platform created in April 2012 by China and 16 Central and Eastern European (CEE) countries.

In his meeting with Prime Minister Beata Szydlo, Zhang mentioned Szydlo's attendance at the Belt and Road Forum for International Cooperation in Beijing in May, during which leaders of the two countries reached a series of new important agreements on strengthening relations.

Both nations, Zhang said, could make use of existing mechanisms and platforms to further infrastructure cooperation, improve service of the China-Europe freight trains and expand new areas of cooperation.

Zhang also said China attaches importance to developing relations with the EU and is willing to work with EU countries, including Poland, to continually promote the relations between China and the EU.

Szydlo believes the Belt and Road Initiative proposed by Chinese President Xi Jinping is of great significance to a more balanced and sustainable development of the global economy.

Zhang also called for reinforcing the sharing of experiences between the two countries in the area of legislation and supervision, and promoting friendly exchanges in culture, education and tourism.