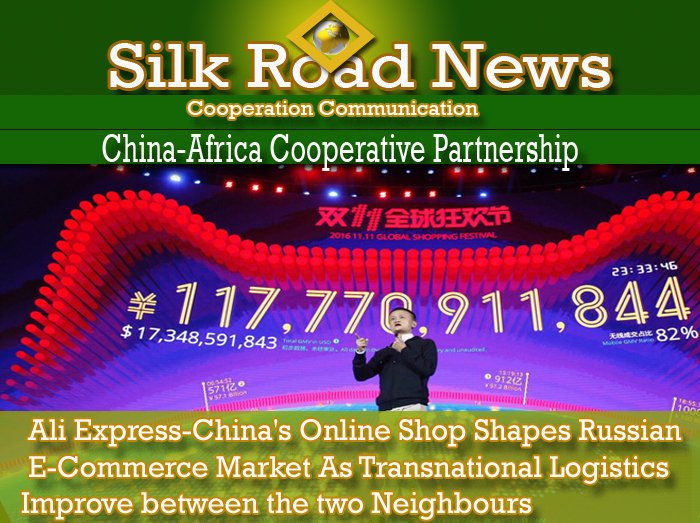 Maria Chiscakova, a 22-year-old living in Nizhny Novgorod in western Russia who places at least one order via the Internet per month, tells a convincing story as an experienced online "shopaholic."

Chiscakova began to shop overseas about three years ago at Ali Express, the cross-border online shopping unit of the Chinese e-commerce giant Alibaba Group. After several satisfying orders, she introduced it to her family and friends. Now they have all fallen in love with the online shop.

"I ordered a mobile phone online, and it's the best I have ever used. The headset my husband Oleg bought is also amazing. We are both surprised that it is of high quality and inexpensive at the same time," she said.

The competitive quality and price of Chinese goods as well as the great convenience brought by online shopping make Chiscakova and her family and friends loyal customers of the portal.

"Frankly, I don't like shopping malls. There are a lot of people and they are in a bad mood as the prices are high or shop assistants are rude. A lot of my friends share my views. That is why Ali Express just saves us," she said.

Chiscakova is one of the 22 million Russian customers of Ali Express. On Nov. 11, 2016, the occasion of an online shopping festival, Ali Express received 20 million orders from Russian customers, up 85 percent year-on-year, accounting for 60 percent of its total overseas orders on that day.

The company had its ups and downs after it entered the Russian market in 2012. After suffering a two-year financial loss in the beginning, it gradually got on the right track and has become the largest online retailer in Russia, followed by Amazon and eBay.

Apart from the devaluation of the ruble since 2014, Ali Express' success could be a result of the company's transition of its business model from B2B (Business to Business) to B2C (Business to Customer), which simplifies the shopping process and enables goods to be delivered directly to customers, according to media analysts.

"The devaluation of the ruble can only affect sales in the short run, which is equal to all online shops. Therefore, if we get to the bottom of it, it is because of the fine quality and reasonable prices of Chinese products," he said.

On March 26, Ali opened its second official show-room in Moscow, allowing customers to try out any piece of clothing, accessories or electronic devices before making a well-informed decision.

"The key advantage of our shops is that you can come, see the goods and understand which size you need, because those who order online always have questions regarding the size they need or whether the sizes online coincides with the Russian sizes. Here they can make sure they need S or M or L," said Oxana Belyakova, commercial director of Indigo Lab LLC and official partner of Alibaba Group.

According to Belyakova, Ali Express has collected plenty of useful information from official show-rooms, which helps to select better goods and suppliers for the Russian market, thus improving its online shopping service.

In Zawatsky's opinion, Ali Express plays an important role in pushing forward the overall development of Russia's e-commerce market, as it helps to shape new consumption habits of Russian customers.

"Ali Express has opened up a whole new world to Russian customers, leading them to a better life," Zawatsky said.

Moreover, it has provided residents outside the Moscow region with more convenient shopping choices.

"When Ali Express and other online shops alike appeared, where you can order without any direct contacts, my perception of the world has changed a bit. I live in the future and here it is the bright Russia of the future. And not only Russia, but also the entire world has become closer. It is so cool," Chiscakova said.