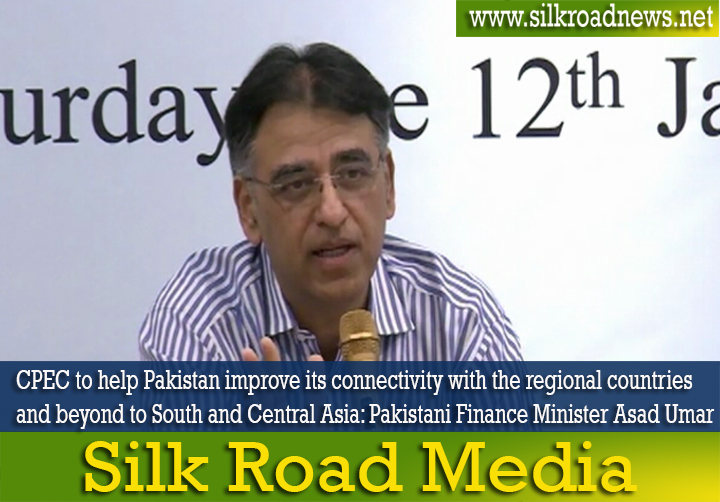 Islamabad, Jan. 23: China-Pakistan Economic Corridor (CPEC) will help his country improve its connectivity with the regional countries and beyond to south and central Asia, Pakistani Finance Minister Asad Umar said on Wednesday while addressing a ceremony held in the capital city of Pakistan.

CPEC is the most important component of China’s Belt and Road initiative, Minister said adding further “I believe that CPEC will be the center of gravity of the global trade in the future”.

CPEC is a cluster of infrastructure development projects, worth $62 billion as of 2017, are currently under construction throughout Pakistan.

He said that Pakistan is also working on a plan to bring forward other parties to invest in various projects along the CPEC route to accelerate economic activities and increase jobs for the youth.

Terming CPEC as the best example of Pakistan-China friendship, the finance minister said that the project is equally important for other countries of the region and hoped that someday neighboring countries will look beyond their immediate interests and join Pakistan and China in the CPEC.

To support the Pakistan’s ailing economy,  all-weather friend, China , had pledged to lend $2 billion to shore up dwindling foreign exchange reserves of Pakistan and the federal cabinet has approved a strategy to issue so-called 'Panda bonds' in the Chinese market to raise foreign exchange from global markets.

Pakistan wanted to lift trade relations with all its neighbours and regional countries including Iran, India, and Turkey, Asad Umar said.

Minister said that Iran is an important neighbour of Pakistan in the West and the world should stop creating impediments in trading between the two countries.

“Whenever the World Bank and other international bodies come to me, they always say that intraregional trade is extremely important for boosting economic growth, and also they advise to resume good trade ties with India, but strangely nobody asks me about another important neighbour in the West which is Iran,” he added.

“Impediments have been created for trading between Pakistan and Iran and I am mixed up that how that criteria fix in the economic theory that trade with the neighbour in East is good whereas trade with neighbours in West is not good.”  He hoped that hypocrisy of the global community will also reduce with the time.