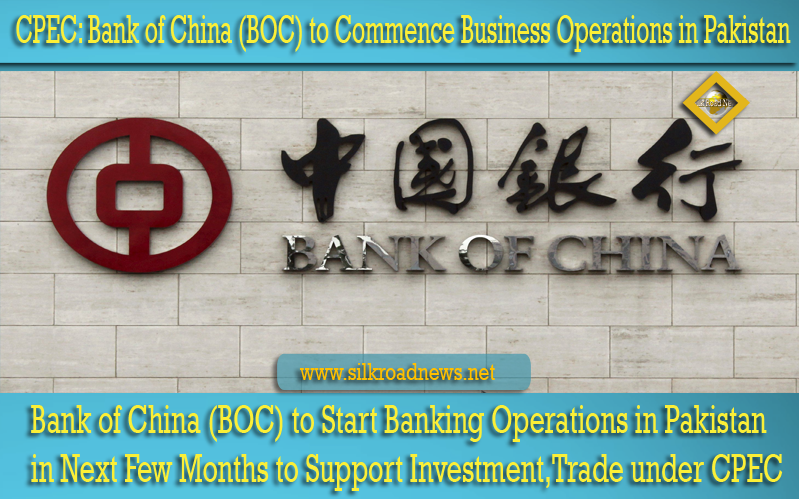 Bank of China to Commence Business Operations in Pakistan to Boost Bilateral Investment,Trade under CPEC

Karachi, Aug.19: Bank of China (BOC),one of the 5 biggest state-owned commercial banks in China, is set to commence banking operations in next few months as the bank seeks to expand its presence in the Pakistani market and help meet financing requirements of China-Pakistan Economic Corridor (CPEC) related projects, the central bank’s official said on Friday. Pakistan’s central bank issued a banking licence to BOC on May 11, 2017 to carry out banking business in branch mode.

“After fulfilling all regulatory requirements and achieving operational readiness, the BOC will approach SBP for permission to commence business within a timeframe of six months from the date of issuance of its banking license,” the State Bank of Pakistan chief spokesman Abid Qamar said in response to questions emailed to him by The News.

“It is hoped that BOC will start its operations in Pakistan in September/October 2017,” he added. The Chinese lender is currently in the process of setting up office and hiring a team of bankers for Karachi operation, sources with direct knowledge of the matter informed.

They said there are more chances the bank will be launched by the last week of September or in the first week of October. Bank of China is the second Chinese bank to enter Pakistan. The central bank issued licence to Industrial and Commercial Bank of China to start business operations in 2010.

There are four foreign banks operating in Pakistan: Bank of Tokyo, Citibank, Deutsche Bank, Industrial and Commercial Bank of China. Industry officials said the foray of Chinese banks into the local market could overcome the financial needs of $57 billion worth of various energy and infrastructure projects under CPEC.

“It would pave the way for the timely completion of early harvest projects under CPEC,” said a banker.     “It’s [BOC] services can include: project and trade financing.” The SBP’s official said that Pakistani banks were also interested in opening branches in China to boost their penetration in the Chinese market.

“In China, six Pakistani banks have their presence as representative offices. These banks include NBP, HBL, UBL, Bank AL-Habib, Askari Bank and Allied Bank Limited,” he said. In March 2017, HBL opened one branch at Urumqi, China. NBP is also interested in opening a branch in Beijing, China and SBP has issued in-principle approval for this purpose in November 2016.

“The presence of Pakistani banks in China will be beneficial for bilateral investment/trade, especially in the context of CPEC,” he added. The BOC is a subsidiary of China Central Huijin, investment arm of the government of China.

The bank is not only operating in the Chinese mainland, but its footprints have reached to 50 countries. Nineteen of those countries are located across the Chinese “One Belt One Road” initiative.