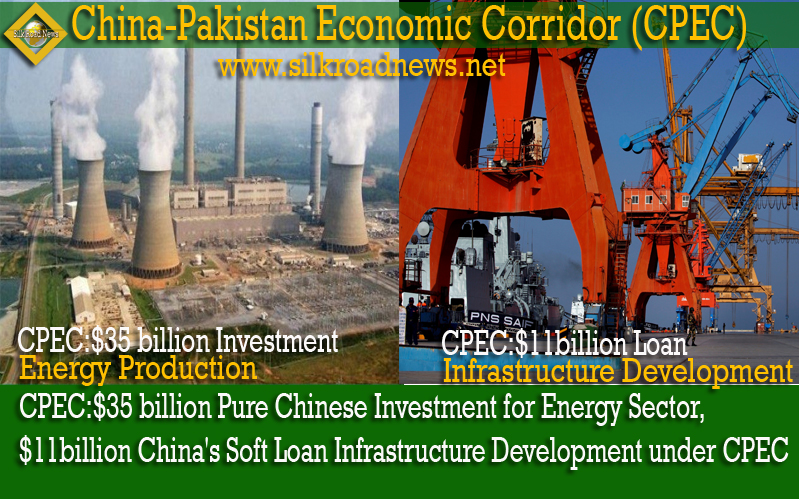 ISLAMABAD, Aug 7 : Out of total $46 billion, $35 billion was purely investment from China under the China-Pakistan Economic Corridor (CPEC) for energy sector, and the rest was given to Pakistan as soft loan for infrastructure development.

Minister for Interior Ahsan Iqbal, who led CPEC from 2013-2017 as a Minister for Planning Development & Reform, informed the National Assembly of Pakistan on Aug. 7 during the question-hour session.

The loan, he said, had been given at very low rates. “We are thankful to China for making such a huge investment in Pakistan.”

Parliamentary Secretary for Ministry of Communications Alam Dad Laleka said the CPEC link road with total length of 106 km would connect Khuzdar with Baasima. The PC-1 of the project amounting to Rs 19.88.435 million had been approved by ECNEC in its meeting held on April 12.

The application for obtaining loan from Exim Bank China for the project, he said, was under preparation in the National Highway Authority (NHA) and would be submitted to the Ministry of Communications and Economic Affairs Division shortly.

Alam Dad said the construction work on the project would commence soon after signing of a loan agreement with Exim Bank China and completion of the procurement process.

He said since the Islamabad-Peshawar Motorway (M-1) was an access controlled facility, the NHA had installed fence along it.

However, he said, at certain locations people from adjacent villages cut fence for passing through the Motorway. In some cases, theft had also been reported on which the NHA along with National

Highways & Motorways Police had got lodged first information reports at local police stations and legal actions were taken against the culprits, he added.